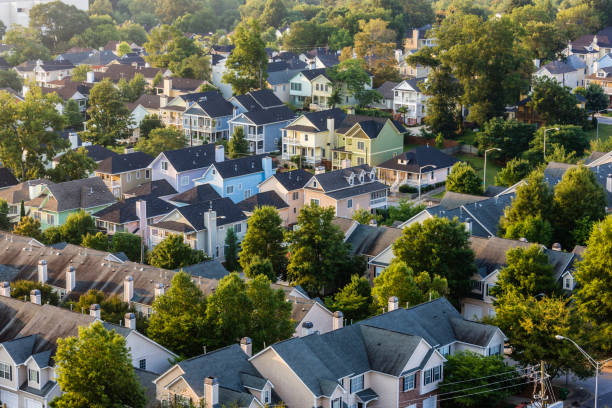 Atlanta is a bustling metropolis with a population of over 4497,642 (2020) people. The city is divided into many different neighborhoods, each with its own unique culture and personality.

Some of the most popular neighborhoods in Atlanta are Buckhead, Midtown, and Downtown. Buckhead is known for its high-end shopping and dining, while Midtown is home to some of the city’s best nightlife.

Downtown is the financial and commercial center of the city and is also home to many of Atlanta’s most popular tourist attractions. no matter what your interests are, you’re sure to find a neighborhood in Atlanta that’s perfect for you.

Atlanta’s economy is considered diverse, with dominant sectors that include logistics, professional and business services, media operations, and information technology. Atlanta has topographic features that include rolling hills and dense tree coverage.

Related: The 10 Wealthiest Cities in Georgia

The 10 Wealthiest Neighborhoods in Atlanta

As the cost of living in large metropolitan areas continues to rise, more and more people are moving to the suburbs. While this often means a longer commute, it also can mean living in neighborhoods with some of the wealthiest residents in the country.

Atlanta is no exception, and there are several neighborhoods where the average household income easily exceeds $200,000 per year.

If you’re looking for wealthy neighborhoods in Atlanta, here are ten of the best options.

Peachtree Park is a neighborhood in Atlanta that is known for its luxury homes and its high-end shopping and dining options. This neighborhood is perfect for those who are looking for a luxurious lifestyle, as it features some of the most upscale real estate in the city.

Peachtree Park is home to some of the best restaurants and shopping in Atlanta, making it a great place to live for those who enjoy the finer things in life.

But what makes Peachtree Park Atlanta so wealthy? Part of it has to do with location. The neighborhood is situated in a prime spot near some of the city’s most desirable amenities.

It’s also home to a number of high-end shops and restaurants. But another important factor is that Peachtree Park Atlanta is an exclusive community. Only a small handful of people can call it home, which drives up property values and creates a more affluent atmosphere.

Related: The 10 Most Expensive Cities to Live in Georgia

Ansley Park is a neighborhood in Atlanta that is known for its wealth and luxury homes. It is located west of Midtown and north of Piedmont Park, and it is considered one of the most affluent areas in all of Atlanta.

Ansley Park is home to stately mansions, tree-lined streets, and a central park that is perfect for strolling on a warm day. But Ansley Park is more than just a pretty face.

The neighborhood also boasts a convenient location, with easy access to downtown Atlanta and the airport. Plus, its residents are some of the most affluent in the city.

Many of them are top executives or successful entrepreneurs who can afford to live in luxury. As a result, Ansley Park has all the trappings of wealth, from its luxurious homes to its well-heeled residents.

Related: The 10 Richest Cities In Connecticut

Buckhead is one of the richest neighborhoods in Atlanta. Located just north of downtown, Buckhead is home to some of the city’s wealthiest residents. The area is also known for its high-end shopping and dining options.

The average home price in the neighborhood is over $1.2 million, and many of the homes are large estate properties. There are also plenty of high-rise condominiums and apartments available for those who want to live in the heart of the action.

Buckhead Atlanta’s wealth is largely due to its location. It is situated in the heart of the city, near some of Atlanta’s most prestigious neighborhoods.

In addition, Buckhead Atlanta is home to a number of major corporations, which bring in high levels of revenue. The area boasts a number of luxury hotels and restaurants, which attract visitors from all over the world.

Tuxedo Park is one of the wealthiest and most exclusive neighborhoods in Atlanta. It is home to some of the city’s most influential and powerful people.

The homes in Tuxedo Park are among the most expensive in Atlanta, and the residents enjoy a lifestyle of luxury and privilege. Tuxedo Park is located in the heart of Atlanta’s financial district, and its residents are some of the most successful people in the city.

The average household income in Tuxedo Park is over $99,130, and the median home value is over $2.3 million. The homes in Tuxedo Park are large and luxurious, and many of them are historic mansions.

The residents of Tuxedo Park enjoy a high level of security, as the neighborhood is gated and patrolled by private security. Tuxedo Park is an enclave of wealth and power, and its residents enjoy a lifestyle that few people in Atlanta can afford.

Morningside-Lenox Park is an affluent neighborhood in Atlanta, Georgia. The area is known for its luxurious homes and high-end shops and restaurants.

It is also home to some of Atlanta’s most prestigious private schools. The median household income in Morningside-Lenox Park is over $105,916, and the average home price is over $1 million.

The neighborhood is located just minutes from downtown Atlanta, making it a convenient place to live for those who work in the city. Morningside-Lenox Park is an ideal place to live for families who want access to the best that Atlanta has to offer.

The area’s top-rated schools, upscale shops and restaurants, and proximity to downtown make it a sought-after neighborhood for those who can afford to live there.

Oakdale is one of the most affluent neighborhoods in Atlanta with an average household income above the city average, and the residents enjoy access to some of the best schools and amenities in the city.

There are plenty of shopping and dining options in Oakdale, as well as parks and recreation facilities. The neighborhood is also just a short drive from downtown Atlanta, making it easy to commute to work or enjoy all that the city has to offer.

There are many factors that contribute to the wealth of Oakdale. One reason is the number of high-paying jobs in the city. Many of the residents are employed by top companies such as Coca-Cola, Delta Air Lines, and The Home Depot.

Oakdale Atlanta is home to many successful entrepreneurs and businessmen. The city also has a very low poverty rate and a high rate of homeownership.

Read: The 10 Most Expensive Restaurants In Atlanta

Virginia Highland is known for its upscale shopping, restaurants, and bars. The neighborhood is also home to a number of high-priced homes.

Virginia-Highland is a great place to live if you want to be close to the action but still have a luxurious lifestyle. The neighborhood is bordered by Ponce de Leon Avenue, North Highland Avenue, Briarcliff Road, and Clairmont Road.

The area is known for its high-income levels and upscale lifestyle. Virginia Highland is home to some of Atlanta’s most wealthy and influential residents.

The neighborhood has a variety of luxury shops and restaurants, as well as top-rated schools. Virginia Highland is also convenient to downtown Atlanta, making it a popular choice for those who want to live close to the city’s amenities.

In addition to its many advantages, Virginia Highland is also a historic neighborhood, with a number of older homes and buildings that add to its charm.

The neighborhood is home to a wealth of historic architecture, including the Candler Park Golf Course and the National Register of Historic Places-listed Edward L. Bouleware House.

The park also features a playground, basketball courts, and a swimming pool. The neighborhood is adjacent to the BeltLine, a 22-mile network of multi-use trails being built along abandoned railroad tracks.

Midtown is home to some of the city’s most expensive real estate and many of its most prominent businesses. The neighborhood is also known for its nightlife and its vibrant arts scene.

Midtown is bounded by North Avenue to the north, Ponce de Leon Avenue to the south, Peachtree Street to the east, and Interstate 75/85 to the west.

This commercial neighborhood is also one of the most populous districts in Atlanta, with a population of more than 26,009 people.

Midtown is home to many of the city’s most popular attractions, including the Fox Theatre, the High Museum of Art, and Piedmont Park. The Midtown Alliance, a business group, has been instrumental in revitalizing the area.

Ormewood Park-East Atlanta is a neighborhood in Atlanta that is known for being one of the richest neighborhoods in the city. The median income for households in this area is well over $92,346, and many of the residents here enjoy a high standard of living.

The neighborhood is home to a mix of families, young professionals, and retirees, and there is something for everyone in Ormewood Park-East Atlanta.

There are plenty of upscale shops and restaurants in the area, as well as a number of parks and recreation facilities. The crime rate in this neighborhood is very low, making it a safe place to live.